Introduction
This has been a long-going project now, started in the summer of 2007. They were supposed to be very dynamic and powerful reproducers of the Heavy Metal-genre, with the focus on the mid bass and ability to play loud, and while I succeeded on some points I failed miserably on others.

Originally a two-way with a simple filter, it turned out the tweeter I based the design around wasn't very good. The filter got complicated but it didn't help. Even with high-order slopes I couldn't cross low enough to match the dual eight inch woofers. They're up and playing now and they sound pretty good as long as you don't get excited with the volume knob, but the project was kind of a failure that I blame on bad planning and not researching the drivers enough. I'm updating this page to show some Ideas on how I can make these speakers what they should have been, without making new enclosures.


Ok, so what to do? I have the enclosures, woofers and some tweeters that has to be crossed high. Well, I'll add some mid-ranges and I can cross a lot higher!

Cabinet
The cabinets turned out very well and I don't want to remake them.. What I'm going to do is simply turn them up side down and get some more space for the mid ranges and tweeter, and the woofers closer to the floor. The old tweeter hole between the woofers will be covered up.

It will require the addition of two chambers for the mids of about 2 liters each. I will likely use some paper tubing for this, still not sure how to get them inside and routing through the 5 cm baffle will be tough.

Here's the old construction drawing.  Now imagine it flipped up side down and with the tweeter with the mids above and below it centered at 90 cm height. I will make a slightly revised version of the enclosure if the works out, with the bracing placed a bit differently. As it is now I will have to hack off the (what will become) upper brace to fit the lower midrange drivers. We'll see how it goes. 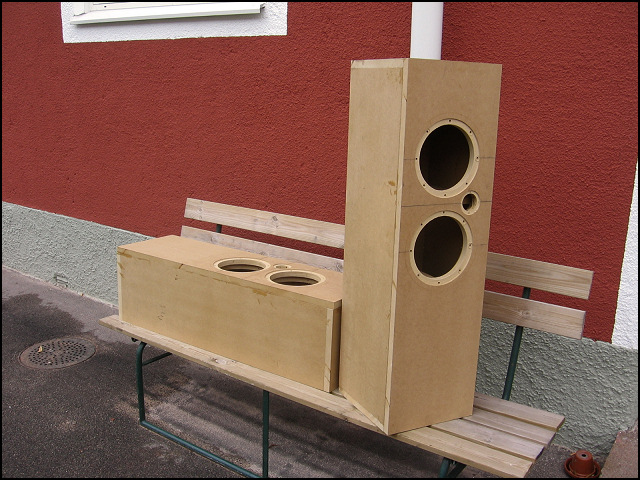 The bench barely coping with the weight, which is about 40 Kgs a piece.
Old vs. New. Same box, new holes! Listening axis is a lot higher now. No need for any feet or sockets to get the tweeters up to ear-height. On the other hand, vertical lobing will be worse with the 3-way design so it's necessary.

The mids will steal a few liters from the woofers so the Q of the box will go up  a couple of decimals from the 0.6 they're at now (60 liters), but that should be all right.

Crossover
This will be the fifth or sixth crossover I make for these! But this time I have some new drivers on my side, so I hope it works out. It can get expensive with all them there coils and caps.

Even with the messy filter the impulse response is very clean and I think I might be on to something here.

Now I'll just need to get a hold of  four mid ranges and route some holes and we'll see. It can only get better.

This is what they will look like if all goes well.