Updated April 16th 2008 - Construction details and filter added
Introduction
Usually when auditioning a small stand-mounted speaker you will overhear the line "Where's the subwoofer?". Well, where is it? It's not there becuase your impression of "deep" bass is likely just strong harmonics (which isn't always bad, just saying) and even such a small speaker can produce the lowest notes of most instruments at low output levels.

I'm tired of all these small speakers with five inch woofers that "don't need a subwoofer". Well, you never "need" a subwoofer, but do you want one? I'm going to build a speaker that's smaller than yours and that's capable of playing deeper, cleaner and louder than yours. And it shall be named 'Scimitar'.

Lending from earlier experiences, I will pair a dedicated woofer with a fullrange driver and do it with as few filter components as possible. Basically a stand-mount 'Bellicose'. It is something I have always wanted to do since I consider 'Bellicose' to be my most succesful speaker to date (although they are still just prototypes - working on that).

I prefer this configuration because you can use a woofer that's optimized for the lower frequencies rather than having to play the low end and the midrange. Todays modern fullrange drivers can match some of the domes out there in the high range, and you get the benifit of being able to place the crossover frequency where it hurts the least, where the ear isn't as sensitive and where the wavelengths are long. You also get a very controlled dispersion without unmanagable humps or dips in the off-axis response due to different drivers directivety patterns not matching up.

Basically, it rocks, and more people should do it.


Drivers
In a surprising move, I am once again going to use drivers from chinese Tang Band. Why? Because they make unique and interesting drivers using new materials and technologies that others dare not try.  QA is really good now a days and they keep improving even old drivers with new stuff they come up with. I like this company. Oh yeah, the price is a factor too.

A five inch woofer because I got a good deal, and a three inch fullrange for a good compromise between dispersion and sensitivity.


Cabinets
The enclosures are built from 19 mm MDF and a bit less than half a standard 1200x2400 sheet is used for all the parts. The ports are slotted and runs along the back, exiting at the bottom-rear of the cabinet. This means you'll have to put some feet on the speakers so they come up at leastt 1.5 cm from the surface they are placed on.

Notice the roundovers on all the parts that form the port, and on the outer vertical edges of the side panels. This should be done with a 12 mm/ half-inch radius bit.

Click image for full size.
When assembling, I recommend gluing all the parts together on one of the sides, leaving the other side off until the last moment. More on that  below.

The port is 12 mm high and to be on the safe side, have a piece of 12 mm thick wood in the port opening as you work, so that it won't bend or crack the joints should an accident happen. Once you have both sides on the port will be very stable.

The fullrange driver has its own chamber and it's made from a 90 mm inner-diameter paper tube, cut to 12 cm length with a MDF lid (can be pretty thin) at the rear. This should provide an internal volume of 0.5 liters, and if you fully stuff the chamber with soft acoustic filling (polyester or wool), the resonance will be damped enough to not be a problem in the crossover.

If you left one side off, installing this chamber should be no problem. Just glue it against the inside of the baffle and make sure it's aligned with the driver cut-out. Don't forget to drill holes for the wiring (and seal them afterwards!).

The chamber for W3-871SC, made out of a paper tube and a lid.
You don't need much sound absorbation material in the rest of the box. Line the walls behind, below and at the sides of the woofer aswell as the ceiling with some thin foam and that should be it The filter should fit on the wall behind* the woofer that forms the port, and the terminals above the port, behind the fullrange driver's chamber.

*(Don't recommend putting it at the bottom as it will be closer to the big iron mass that is the woofer motor.)

The dip in the response at 3 KHz is baffle diffraction I couldn't get rid of. Should be pretty harmless. On-axis has a rise that evens out slightly off-axis. Phase response shows that the drivers are good friends all the way up to 5 KHz, which is a good result considering the low crossover point. Impedance never drops below 4 Ohms and is stable upwards in frequency with some reflex-peaking in the low end. 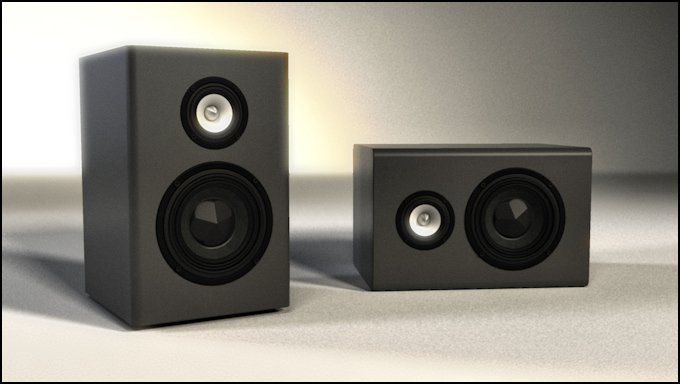 Yeah, you can put them on their side without affecting the sound. Pretty neat.