Note: This is an outdated project I am going to rebuild in the future. The drivers used in the prototypes are not available in the same shape any longer and they are not reproducible.

Introduction
This was a project I built early 2007 with a few criteria in mind. First, a higher sensitivity than any previous projects, secondly a much more true and correct reproduction of sound. I am not afraid of speakers with "character", but these were to have as little coloration as possible with the budget I had.

They were built with a pair of bargain 6.5" mid woofers (W6-658A) from Tang Band and an isodynamic tweeter from Hi-Vi research (RT1II) in a 2.5-way configuration via a series crossover. The slopes were 6/12/12 electrical and the upper bass and tweeter were crossed pretty high at 3.5 KHz. It was the first time I used a series crossover and it worked well and made a lot of sense as I don't believe in bi-wiring/bi-amping anyway.

I made them for a competition in Sweden but did not finish in time. They currently reside with my older sister and they play very well. Neutral, open, absolutely non-tiring, a bit laid back. Good bass into low 30's, and thanks to the tweeter they can play pretty damn loud without sounding harsh. 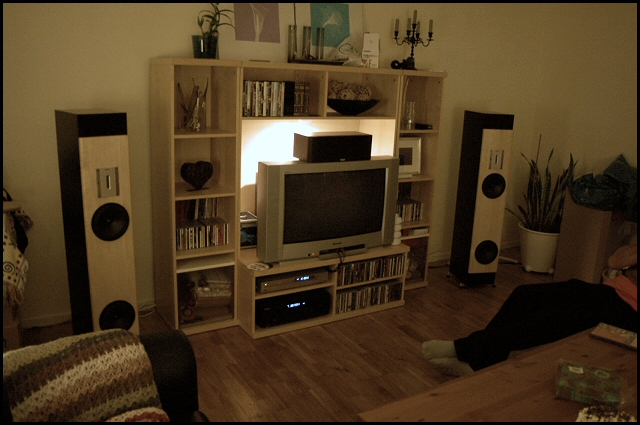 There were some design problems I ran into, namely the off-axis behavior in the upper midrange didn't match up the extreme horizontal dispersion of the narrow ribbon tweeter, so the power response was a bit compromised. But that's half the fun - learning what works and what doesn't.

The cabinets were built of 30 and 16 mm MDF, with 16 mm for the sides and bracing and 30 for the rest. There was also a hardwood outer baffle. There was plenty of bracing so even with the thinner sides they were very solid.

At first the two woofers shared enclosure but at the end I made a sealed chamber for the upper woofer and the lower one had the ported chamber for itself. This was because they would have been a bit bass-heavy otherwise, and I did not want to introduce to much series resistance in the woofer path as that affects the Qt of the drivers. Careful dimensioning of the volume of the chambers made sure the excursions matched down to the tuning point. It worked out well.


The Future
I will reuse the design and general cabinet construction, but I'm looking at completely different drivers. I have simulated on a version with Seas Excels (the Nextel cones) and a Fountek ribbon, but that's expensive and I like to build speakers that sound expensive but are in fact cheap. These would surely sound expensive but they'd better with what the drivers cost in mind. 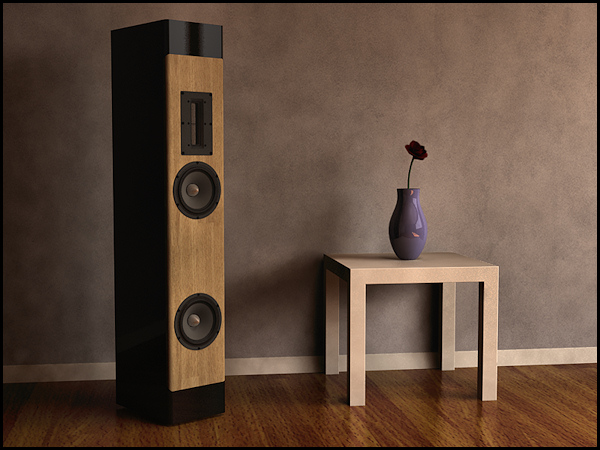 Amta Mk II, with some expensive Seas and Fountek drivers.
Tang Band has some interesting new mid woofers and ribbons coming out this summer and I'll wait and see how they perform. They too are in a higher price segment (than what TB usually land in) but not as high as the Excel woofers or the Fountek Pro tweeter.

What I have decided on is the visual design with the same proportions, the configuration, and hopefully a series crossover will work. With the helper woofer near the floor I am not just increasing its output, I am also reducing and spreading out the effects of the floor/ceiling bounce. Unlike a 2-way with two mid woofers, the lower .5 woofer doesn't have to be anywhere near the other drivers with the large wavelengths in the register it plays.

I'll still stick to a ribbon or planar driver for the tweeter as I liked what I heard the last time. Though they generally have higher distortion, it would seem they have less problems with power compression than a dome-tweeter and that's a huge plus for me. I like it loud and dynamic. Low distortion doesn't mean anything if it's at low levels.
Also, with a tall, narrow ribbon you get reduced vertical dispersion and the floor/ceiling reflection becomes even less of a problem.

It's a good design that with some work could become great.