Introduction
When I first built these, several years ago, the goal was to produce the whole range from 20 to 20000 Hz in a compact floor stander. Pairing an extremely high-excursion 6.5 inch woofer with a full range (or wide range, rather) driver was the only way to realize this. When they were done, I thought they worked all right. The bass went deep and loud, the rest of the register was decent too. 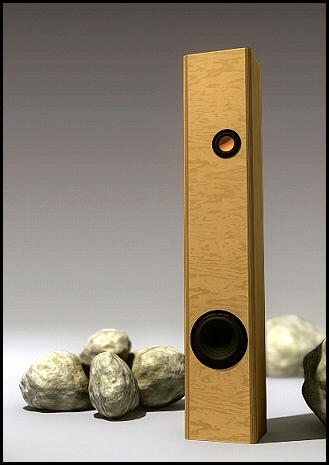 The first Bellicose built.
I made the mistake of using the wrong driver for the high frequencies though. They were originally built with the Hi Vi B3N metal-cone driver which at the time was told to be great (and still is, can't understand why). The filter was very complicated with high-order slopes and a notch to tame the metal-cone breakup. The speakers sounded neutral and correct, but life-less.

Thing is, I built these for a friend so I didn't really have access to experiment on them too much. But a long time later, I convinced him to try another full-range driver with a new, much simpler filter design.

And the difference it made, even with a provisoric filter made from leftover components. They sounded unlike any traditional box speaker I've ever heard. Even to this day when I visit him I can't believe how detailed these speaker sound, and how well they image. They sound like they are so much bigger than they are, like electrostatic dipoles or something, yet with pin-point accuracy.

It took yet another while before we installed the final filters, and now that we have and I know they work like they should, I'm putting this project up for reads again.

These are easily the best sounding speakers I've built, even though they are not the most expensive nor most complicated design. 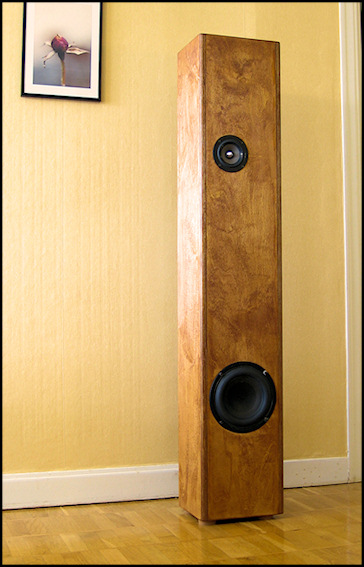 Bellicose MK I with the new driver and a new stain job.
Drivers
The magical driver is a three-inch full ranger from Tang Band, the W3-1364S. Similar to the four-inch W4-1320 they too have a exclusive cast chassis, solid aluminium phase plug, the under hung neodymium motor with copper shorting paths in the gap and most importantly, the sweet, sweet exponential bamboo-fiber cone. They play as high as 30 kHz and can compete with many dedicated tweeters in the upper frequency region.

(This driver can't be found on TB's site, but at the time of writing they can be bought in both the US and in Europe.)

The W6-1139SG (or W6-1139SI) woofer is used in the MK II version as well. I have looked all over for something better but there really is nothing that could replace it in this configuration. It is a neodymium-driven 6.5 inch sub woofer driver with over an inch of linear p-p excursion. It is built on a decent stamped steel frame and has a thick paper cone, big inverted polypropylene dust cap and a thick rubber surround. The inductance is low enough for a simple filter and it is free of serious break-ups, with just a surround resonance around 1 kHz.


Cabinet
The tricky thing with these woofers is to build a small enough cabinet that's tuned low enough. That means some long ports with risk of pipe resonances. The first version of the cabinets had a port that was a bit to small and a bit to long, so that was addressed in the revised version. It also had some tight spaces which may or may not have acted as unwanted resonators. 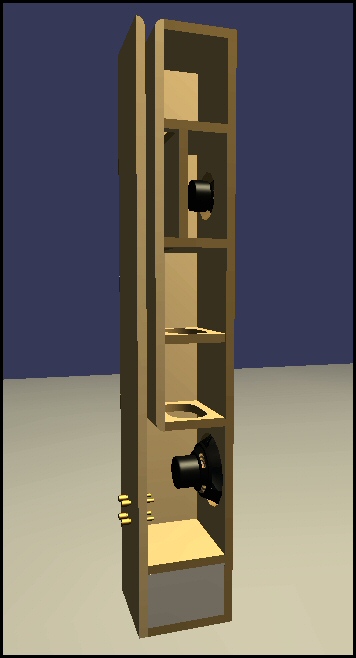 This is the old cabinet built with 18 mm plywood, sand filled in the bottom compartment.
The full range driver has its own 3 liter chamber.
So, the new cabinet. I will once again use high-grade 18 mm plywood because it worked so well the last time. The port is still slotted and runs along the back, but this time exiting towards the floor. The woofer has its internal volume increased to roughly 29 liters, and the port is tuned a wee bit higher, at 29 compared to the previous 26 Hz. This, combined with the floor loading of the port, will actually increase the bass performance by substantial amount.

The W3-1364 still has its own chamber but it's down to about 2.3 liters effective volume. Completely stuffed with some loose wool or similar, the drivers resonance is not of any concern. The woofers volume doesn't need much stuffing but you should line most of the walls near it with some thin but dense acoustic foam. No isotermic material is necessary.

The outer dimensions has barely changed. They are just 2 cm deeper.

As usual, I recommend that you use one of the side panels to put all the parts onto and save the other side for the end. This is so you have easy access to all the compartments until you're certain you haven't missed anything. Where you place the filter is up to you, but it shouldn't end up too large so it should fit at the bottom, below the woofer. The terminal needs to be placed high since the port is in the way.

The two speakers should be mirrored, and the full range driver should be outwards when listening. I would also recommend (since the new version has no sand filled bottom compartment) that you put some sort of outriggers or a heavy baseplate on to them as they are very tall and prone to being tipped over.


Filter
The new filter which has been tested to work really well, combines the impulse response of a 1st order filter but cuts out unwanted frequencies much better. With the prototype filter, the W3-1364S had to play too much low frequencies and sometimes ran out of excursion. With the new filter the excursion is minimized and the W6-1139 will be the limiting factor for maximum output.

Click for full size.
This speaker is designed to work with the room and as such, the simulated curves might look a bit weird. These are all at 1 meter and 2.83 volts so the sensitivity is not bad at all. The rise in the top octave evens out off-axis and gives a good power response, horizontally. Vertically is a bit troubled due to the distance between the drivers, but the woofer is near the floor for a good reason (output gain and elimination of the floor reflex).

The low end is a bit hard to drive with a min. impedance of 3 Ohms. I recommend a beefy amplifier for these, preferably above 150 watts per channel and a good power supply.

This is an approximation of the in-room response, at 2.5 meters (which is a good listening distance for these) and 20 volts.  Notice that even at this sustained level, the speakers are still linear down to 25 Hz. That's pretty sweet!

The W3-1364 measured in box, the top range isn't quite as bad as the simulations make it to be.

Conclusion
Whilst they cannot play much louder than a typical 6.5" mid/1" dome combo, they can do so at much lower frequencies. While a typical speaker's max output level is specified above 50 Hz or much higher), Bellicose can play at the same levels an octave or more below that. Few speakers of its size can play such a broad range, and that with just two drivers in such a small enclosure.

I've already spoken of their ability to image in the introduction but it's worth mentioning again. They're just holographic and so very, very fun to listen to. They can really place all the musicians in the scene, and you can even hear each individual voice in a large choir. The W3-1364S is such a great driver it's almost funny.
Of course, the bass is a strong point as well. They play very deep and with an authority that you rarely hear in something so small. Watching the little cones move several centimeters when you play, say, Infected Mushroom never gets boring.

They're still the best speakers I've made to this date and I'll have to work hard to beat them. A shame I don't actually own a pair, myself...


Limitations (or rather, what can be improved)
The main issue with these speaker is thermal compression in the full range driver. In their very existence, they were never meant to play at high sound pressure levels. Their voice coils are usually smaller than that of a typical dome tweeter, and has no ferro fluid to help transfer heat. They also have to play a much bigger spectrum of the sound. As the voice coil heats up, the driver's behavior changes drastically and distortion occurs. This is hard to get around in a design like this, but still a big limitation.

I have some ideas on what I can do but nothing I have been able to confirm yet. Soon...